When I saw the Long-tails last, it was May; they wore spring: the colors of tundra muck and tawny grass that’s still awaiting vernal resurrection. They flew by day; they flew into the night; I knew this because during the eclipse, I sat at the borderlands—beach and Superior; day and night; the world known to humans and the world that is not—and I heard flocks go over, their voices ringing, joyful, vivifying the night. I longed to go with them, to cross the Laurentian Divide and continue on through the taiga, then the tundra. Someday, I will. But I couldn’t this time. Instead, not long after this night on the borderlands, I went south. Migration is a movement from scarcity to abundance. For the Long-tails, it was time to bring about their kind’s new generation, reared on the richness of arctic summer. I was in pursuit of riches, too, the sorts that are attached to the tip line of a bar receipt. It pays the bills better than counting ducks does.

Summer went fast this year; the time when we expect the Long-tails to return came quick, awfully quick. They’re already wearing winter when they hit Superior and in winter, Long-tails wear the colors of ice and unsettled water. The tundra wetlands they breed on are closing up; the wind that ferries them south has a bite to it. And at this point in the season, my soul’s a little icebound, my words bite more often than I wish they did—the waters are quite unsettled. A few weeks ago at a place I work, a man came up to the bar and ordered a garbage bag for his sick teenage daughter to vomit in. For about the next hour, her family had a grand old time eating and drinking and carousing around her while she vomited into that bag. Something in me snapped that day, and I’ve been dark, stormy, since.

Later, bartending a wedding where one of the signature drinks was an old fashioned, a groomsman hung on to each empty glass as if it were some sort of trophy. By his last visit to the bar, ten glasses had accumulated; coherency, correspondingly, had dissipated. When we encountered him next, he was pissing in our storage room. I made more that night than I do on an entire WPBO paycheck, and it was evident, then, that what had been scarce and what had been abundant had swapped places. Time, I knew, for a migration. Back home, I sat in my driveway, thinking about what is monetized and what is not. It doesn’t bother me, really, that counting ducks is not profitable. What is hard for me to reconcile is that in one of my worlds, I exist solely in this space of observation, where it is easy to practice being present. And then, in the other world, my existence enables people to turn things off.

I much prefer the fronts that rage over Superior in late fall, spitting sleet and ducks south and east. Two years ago, Tripp and I were out on a job at Manitou, an hour’s ride from the state harbor at Lac La Belle. For most of the two weeks we counted, the height of the waves and the length of the boat meant to fetch us measured about the same. It was so stormy that ducks, even, weren’t really migrating. The day before we were scheduled to get pulled, there was a few hours’ gap between a gale from the south and the next gale from the northwest, and in those hours, more than 13,000 waterbirds passed Manitou. Every inch of sky, water, and horizon crawled with Redhead, loons, and scaup, and it was overwhelming in the most beautiful way. But the weather window, so critical for these migrating birds, was the same weather window we needed to get back to the mainland. We had a few days of food left, but we’d already run out of tequila, and coffee was not far behind. The forecast—both the NOAA one and maybe for our relationship (we call coffee “nice juice”)—wasn’t looking promising. We made it out, barely. In transit, the weather switched on us and the captain had to dock on the opposite side of the Keweenaw than the one he’d set off from, so we thumbed for a ride between Copper Harbor and Lac La Belle. Later, southbound on U.S. 41, the sign at the casino in Baraga implored, “FEELING LUCKY?” And damn, was I. Not just lucky the Coast Guard wasn’t involved in the extraction, but lucky to have been so vulnerable on an island subject to Superior’s indomitability; to have experienced this beautiful duck flight in the context of our own migratory needs. That day, there were fewer degrees of separation between our world and theirs.

After Manitou, I counted further east at Pictured Rocks near Grand Marais. I spent those two weeks almost entirely alone, and that’s when I decided to spend 2021 traveling the Lower 48 alone. Looking back at what I wrote during those weeks, it’s clear the Long-tailed Duck flight was a precipitating factor:

It is all achingly beautiful: literally. Physically. Frigidly.
But to stand out amidst such movement is to become possessed by migratory urges, desires…
It’s a journey navigated not with straight lines, but with serpentines: as the Long-tail flies
Is not as the crow flies…
As the Long-tail flies is not how most ducks fly…
Standing there on Superior’s south shore
I unravel the horizon; the flocks; the feelings
The outer movement engages with the inner restlessness
The Long-tails fly into and out of the heat shimmer
Into and through my being. *(the rest of those musings can be found here, “As the Long-tail Flies“)

About the time of the old fashioned wedding, the forecast 10-days off was a beacon of hope: suggested a storm of similar magnitude to the one that sank the Edmund Fitzgerald. Waves would exceed 20 feet; winds would gust out of the Hudson Bay at more than 60 mph, carry on right past Whitefish Point.  I’ve been fortunate to see enough fall Long-tailed flights to know that their exodus from the arctic does not typically occur on a nice day. In fact, it usually happens on the first day I pull out the insulated bibs and the biggest puffy—the last-resort layers.

The forecast held; I drove north, already feeling lighter than I had in several weeks. Really, my purest form of happiness comes with a full tank of gas and $4 for the Bridge. The first day, October 17, the wind was from the north but it was not yet a gale. Alec Olivier (WPBO’s fall counter) and I had 1695 Long-tails and a Sabine’s Gull. The following day, the winds peaked mid-morning, and Alec and I had a monster flight of more than 14,000 Long-tails. We also broke WPBO’s daily high count of White-winged Scoter (978) and Black Scoter (178), and had three more Sabine’s Gulls. The following day, October 19, was Alec’s day off and I was able to convince Chris Neri, field ornithologist, to let me cover the count. We’d had so many Long-tails the day before that I assumed the bulk of the flight had already gone by…and I was wrong. We had 16,266 Long-tails, 861 White-winged Scoters, 214 Black Scoters, 574 Red-necked Grebes, 484 Common Loons, 3 Harlequin Ducks, 2 Black-legged Kittiwakes, and a jaeger. (Here’s the eBird checklist!) Per Seawatching, the previous daily high count for Long-tailed Duck in North America, 16,231, was made on 10/31/2004.

High counts and new records and scarce species are always thrilling, but it’s so much more than that for me. It’s understanding. It’s connection. It’s a sense of place. It’s feeling like I’ve been put in my rightful place. To have spent three full days exposed to Lake Superior’s volatility is a sort of crucible.  At times, I knelt on the cobbles for hours because it was the only way to circumvent the tripod shake which made identifications impossible. Sometimes, a Ring-billed Gull rested a few feet away in my lee. Twice, I struggled out to the tip of the point to let the wind, sand, and swells have their way with me. Huge mounds of green and sable heaved in from the horizon; just above them, flocks of several hundred Long-tails wound and twisted over the troughs. When I closed my eyes at night, the Long-tails kept flying behind my eyelids…perhaps, they kept flying down Superior, too.  Migration: movements from scarcity towards abundance. 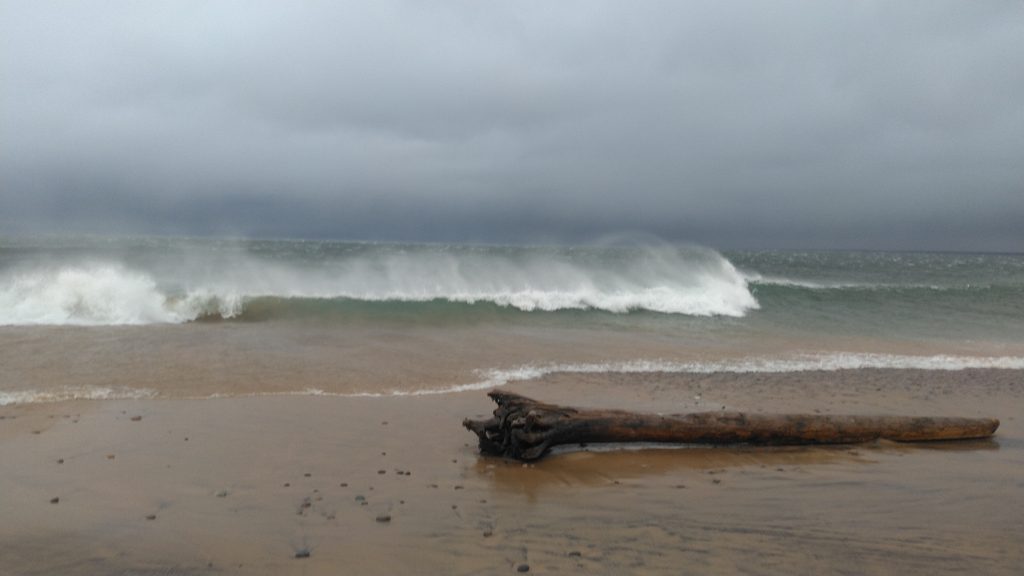